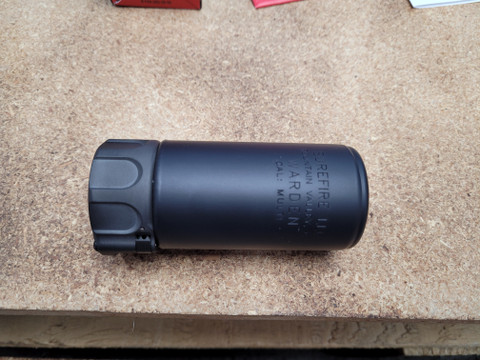 Hover over image to zoom

The SureFire Warden Blast Regulator directs the concussive blast of the fired round forward of the weapon system without venting gas to the side, as seen with standard muzzle brakes. This aids in reducing the overpressure felt by others immediately to the left and/or right of the shooter's firing position. It also limits any dust signature from the weapon when fired from a prone position. The Warden Blast Regulator attaches to any SureFire SOCOM 5.56 or 7.62 muzzle device through the same patented SureFire Fast- Attach(R) system found on SureFire SOCOM Series suppressors. Unlike sound suppressors, this product is not an NFA device, sound control without any of the restrictions associated with suppressors.

This product hasn't received any reviews yet. Be the first to review this product!

All prices are in USD.